Current registered users: This program will install side by side with your previous installation and not overwrite it.
For new users: There is a free version with a 2000 line limitation per project converted.

Version 5.07 contains a number of improvements, thanks to the detailed feedback and interaction with many customers.

In the project group screen, click the View menu, then pick the field to filter by.

Choose the values you want displayed. 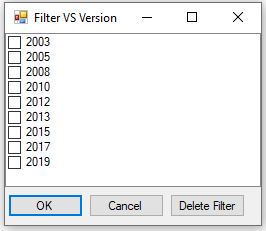 You can tell a filter is applied by the filter icon in the column header.