Rather than rely on free lexical analyzer and parser tools, often written in non-.Net languages, VBConversions hand writes all code for maximum flexibility, and strives to fully understand your code, including digging through referenced assemblies to resolve identifiers.  This knowledge is critical in accurately translating VB.Net, with its many ambiguities, into C#.  Finally, VBConversions will compile your converted C# code and then fix it by parsing and understanding the compiler error messages, in much the same way a human would.

In addition, VBConversions relies on massive testing, and has spent the last 15 years amassing a test bed of over 15,000 VB.Net projects.  Such continual regression testing is absolutely critical to achieving and maintaining high accuracy.  New projects are continually added to the test bed, and each release must pass a full regression test before it is released to the public.

VBConversions’ superior accuracy is no accident.  Its architecture used wasn’t chosen for its ease of initial building, but for maximum accuracy at any cost.  Code is hand written in .Net languages and your VB.Net code is first understood, then translated.  The final use of the Microsoft C# compiler to validate accuracy and fix remaining errors in the conversion is unique to VBConversions and demonstratively responsible for a significant accuracy advantage over other converters.

Since its first release in 2004 and initial testing on the 101 Visual Basic.Net and C# Code Samples from Microsoft, VBConversions has adopted a “test-first” approach.  VB.Net has no rigorous formal definition and new surprises await at every turn, made more complex by new releases of Visual Studio and the .Net Framework.  This necessitates a pragmatic massive testing strategy, and VBConversions has amassed a test bed of over 12,000 projects to that end, and the numbers grow with every release. 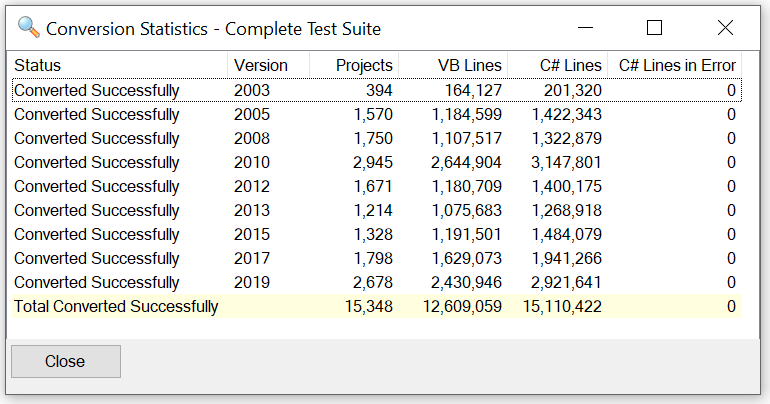